W. R. Grace & Company is an American asbestos manufacturing Corporation with lengthy and strong ties with Canada. W.R. Grace was incorporated as a private corporation in Connecticut in 1895, became a publicly traded corporation in 1953, and expanded into the Canadian market in 1957. The Canadian subsidiary was called W.R. Grace Canada Corp. with a stated company profile as catalyst and mineral products manufacturer. The head office and major plant was located in Valle-field, Quebec. 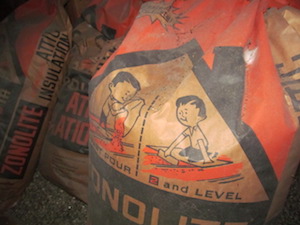 Many W. R. Grace building products contained asbestos but there is none more infamous than Zonolite. W. R. Grace purchased a vermiculite mine in Libby, Montana, from the Zonolite Company (hence the product name) in 1963. Eighty percent (80%) of the worlds vermiculite came from this mine. Half of the vermiculite mined in Libby was turned into Zonolite Attic Insulation sold under names including: 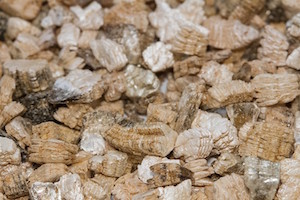 Vermiculite is a volcanic mineral that is fire-resistant and has strong insulation properties. Though vermiculite itself is harmless, much of the vermiculite mined for W.R. Grace’s products came from a geological formation laced with a highly toxic form of asbestos called tremolite. More than 680 million kilograms (1,500,000,000 pounds) of raw tremolite asbestos contaminated vermiculite was sent to processing plants across Canada. Vermiculite was expanded through a heat process that literally popped the mineral into light weight insulation. Plants were located in St. Thomas and Ajax, Ontario (operated by W. R. Grace), Montreal (operated by F. Hyde and Company) as well as Winnipeg, Regina, Edmonton, Calgary, and Vancouver (operated by Grant Industries). The plants were called “Expansion Plants” in the WR Grace material but were referred to by workers and plant neighbors as popping plants or cooking plants. The Ajax vermiculite expansion plant is located 11 kilometers from our office and no longer pops vermiculite but recycles styrofoam for insulation under Grace's post bankruptcy name of GCP.

Although W. R. Grace did not yet own the Libby, Montana mine, Zonolite was being processed in Canada as early as the 1940s. When Grace purchased the Zonolite mine and product line in 1963 they assumed the liability for injury caused by exposure to Zonolite prior to their purchase. This means if you were exposed to Zonolite and are now ill, it does not matter when it was made or installed.

If you want to know more about the trials and tribulation of the populace of Libby, Montana, PBS chronicled the woes of the residents of Libby in a documentary aptly named Libby, Montana. These townsfolk were at the heart of the tragedy caused by the negligence of W. R. Grace but by no means the only victims of the greed and contempt for human life shown by Grace.

Approximately 75% of vermiculite attic insulation in North America is the Zonolite Brand.  Canadian homes that contained Zonolite no longer have a recourse to have some of the costs of removal reimbursed. Unlike the U.S. Zonolite Attic Insulation Trust program that is anticipated to accept claims for the next 20 years, Canadian homeowners were required to file claims prior to December 31, 2009.

W. R. Grace’s liability stems from chrysotile asbestos that Grace commercially purchased and added to some of its fire protection and plaster products sold under the brand names of Mono-Kote and Perltex. Mono-Kote Cement and Fireproofing contained asbestos from 1958 until 1973. Perltex Acoustical Plaster, Textured spray paint and surfacer contained asbestos until the early 1980s. These were widely used by builders of residential subdivisions in the 1970s.

Homeowners should be aware that if you have “popcorn” ceiling finish or textured walls installed before the late 1970s those finishes usually contain asbestos. You should not sand or remove the surfaces without having the materials tested by an accredited asbestos testing firm.

Spray on insulation and fireproofing was sold under the names of Zonolite MK-1 and MK-2 Spray Insulation, Spraytex and Super 40 Spray Surfacer from the mid 1950s until approximately 1974.

The terminal was replaced in 2011 and the old terminal quickly demolished.

The Calgary Stampede Grandstands were spray insulated by WR Grace in the spring of 1972.

Facing 129,000 asbestos liability claims Grace, including 62 domestic entities, filed for Chapter 11 Bankruptcy protection on April 2, 2001. At the same time, Grace Canada was granted an order pursuant to the Companies’ Creditors Arrangement Act in the Ontario Superior Court of Justice. Through this process W. R. Grace was able to avoid liability by establishing an Asbestos Trust to adjudicate and pay personal injury claims arising from exposure to their products. The WRG Trust has assets of approximately $3 Billion Dollars to fund payments to injured parties who can establish that they were exposed to W. R. Grace products and are now suffering from an asbestos caused disease. The WR Grace Trust opened on August 25, 2014 and receives approximately 15,000 claims per year from people suffering from asbestos diseases including pleural plaques, asbestosis and mesothelioma.

Canadian who suffered personal injury from exposure to Zonolite or other W.R. Grace asbestos products are treated the same as American victims by the WR Grace Asbestos Trust and are not required to meet the foreign claimant protocols.

If you worked at any of the Canadian expansion plants, or as an insulator for W. R. Grace, it is certain that you were exposed to asbestos. The WR Grace Asbestos Trust has a list of places where there was danger of being exposed to W.R. Grace asbestos products. None of the Canadian expansion plants or building products plants are on the list. Brown Law is working to remedy this issue.