Like so many corporations, Garlock got its name from the brains behind the company, founder Olin Garlock.  Garlock invented a seal for rods used in train locomotive engines. This sealing product was so much better than anything else on the market at the time Garlock seals became the industry standard. Garlock patented his seal in the United States in 1887.

Less than seven years from Garlock’s first patent, following the registration of this trademark image in 1893, the Garlock Packing Company entered the Canadian market. Their product line was listed as rubber and rubber goods. 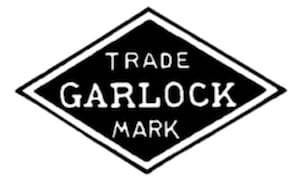 With the advent of mechanization and automobiles Garlock was poised to serve the emerging car manufacturing markets in Michigan and Ontario.

Garlock manufactured gaskets and packing from a facility in the small upstate New York village of Palmyra. This location was ideal for receipt of materials necessary to manufacture their products and then move them on to growing markets. The Garlock Gasket production plant had easy access to the Erie Canal to move its products for sale across the USA.

The automobile market was rapidly expanding, and Garlock Gaskets was well placed to gain a significant share of the market. They updated the ™ in 1906. They were a supplier to General Motors from the corporations inception in 1908.

A large portion of their business initially was making gaskets for boilers that powered ships and locomotives. 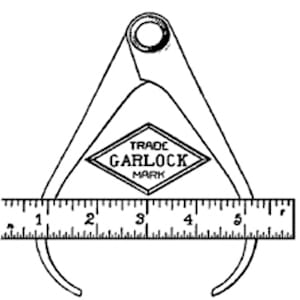 Gaskets manufactured by Garlock contained raw asbestos from the Lake Asbestos of Quebec (LAQ) mine in Canada from 1959 until 1986. If you were exposed to Garlock Gaskets while working as a pipefitter, steamfitter, industrial plumber, industrial machinist, industrial maintenance mechanic or a boiler worker, additional to being entitled to compensation from Garlock Gaskets, an application can also be put forward for exposure to LAQ fiber.

Garlock also purchased raw asbestos from the Ruberoid asbestos mine in Vermont.  If you worked with Garlock gaskets between 1957 and 1966 the asbestos was potentially from the Ruberoid mine and you may also be entitled to compensation from the G-1 Holdings trust that pays Ruberoid injury claims.

Garlock filed for Chapter 11 Bankruptcy protection in 2010 while facing over 100,000 asbestos injury claims. It was Garlock’s intention to voluntarily organize a compensation trust to shed the liability surrounding the company’s longstanding use of asbestos in their gaskets and packing. Garlock proposed that they fund an Asbestos Compensation trust with $385 million. The plan proposed by Garlock was put to a vote by claimants and the plan was rejected.

In March 2016 Garlock tried again to have the a proposed trust approved by upping the capital the trust would have to work with to $480 million. They also agreed to a $17 million settlement with the Workers’ Compensation Boards of Canada.

The new plan would pay claim not only against Garlock but against Garlock affiliate, Coltec and parent company EnPro. This time the plan passed the vote with a 95% yes.  The 5% no votes were primarily Canadians as the new plan effectively gave the share of compensation anticipated to be paid to Canadian Claimants to the Worker's Compensation Boards.  The plan had been amended to limit compensation to Canadian applicants.

In April of 2018 final orders were made in the case. A trustee was appointed and Garlock, Coltec and EnPro have no further involvement with past or future asbestos claimants.

If you have been diagnosed with mesothelioma and worked with Garlock Gaskets contact us to learn about your compensation option.