Understanding How the Statute of Limitations Applies to Asbestos Claims 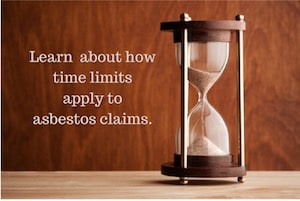 When considering whether to file a claim for compensation for an asbestos related disease such as mesothelioma, you need to be aware that there are time frames during which it is possible to do so and if that time is missed you may lose your rights to compensation.

The Statute of Limitation is a mechanism by which a person or entity will no longer be held responsible due to the passage of time. Essentially the claim is barred once the time limit has passed even if the claim otherwise qualifies. When it comes to asbestos claims this is an unduly complicated and frustrating subject to understand. The simple question you want to know the answer to is, “How long do I have to make an asbestos claim?”

The most important thing to know before you panic is that the time limits start to run from the date of diagnosis of a medical condition caused by asbestos, not the date of exposure.

Asbestos claims follow the doctrine of discoverability. This means that your time limit starts to run when you discover you have suffered damages. This can occur after the death of the injured party as it may require autopsy findings to address diagnosis even if the injured person was being treated for an asbestos disease as the diagnosis may not have been confirmed.

Diagnosis is the Trigger to Start the Limitation Period Running

Being diagnosed with a medical condition related to asbestos usually takes a minimum of 10 years from the date of exposure. This is true even with very heavy, daily exposure. Understanding this makes the usual limitation period, being from the date of an incident, impossible. A law suit can only be successful if you have two factors. The first is liability; a wrong was done. In the case of asbestos, it was exposing of the population to the fibre and products when it, being manufacturing corporate entities, knew that the products caused harm.

The second factor required for a successful law suit is damages. If you cannot prove you have been harmed, or damaged, a claim cannot succeed. The courts realized that this made the Statute of Limitations running from the date of exposure to toxic materials, such as asbestos, unfair.

A decision made by the Supreme Court of the state of Kentucky in the Louisville Trust Co. v. Johns-Manville Prods. Co., Ky., 580 S.W.2d 497, 500 (1979), solidified the principle of discoverability by stating in the reasons for decision: "When an injury does not manifest itself immediately, the cause of action should accrue not when the injury was initially inflicted, but when the plaintiff knew or should have known that he had been injured by the conduct of the tortfeasor."

The Discoverability rule has been adopted in Canada and now forms part of the Limitation Acts of each Province or Territory, or has been clarified by the courts where the legislation does not specifically address the issue. The Limitation for taking personal injury action in all Provinces and Territories in Canada is 2 years with extensions of time permitted in cases where the injured party is suffering from a legal disability and is unable to commence a claim.

The BC Limitation Act, [SBC 2012] Chapter 13, states it the most clearly in Section 6 (1) “Subject to this Act, a court proceeding in respect of a claim must not be commenced more than 2 years after the day on which the claim is discovered.”

The governing documents of some of the asbestos trusts extends this limitation as many of the US states have differing time limits and there is an attempt to treat victims equally. There are also a variety of circumstances that may extend the time limit, however it is best not to count on those conditions being applicable to your claim.

If you or a loved one has been diagnosed with mesothelioma it is important to contact us now so that claims can be investigated and filed within the time limits.