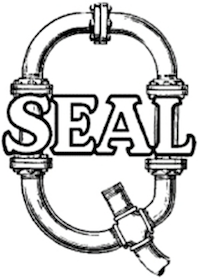 Quigley Company ™ was registered in 1930 by the Quigley Company Inc. The Company was described as a New York Corporation. in their Canadian registration documents.

Quigley Company of Canada was incorporated in 1932 and described as a subsidiary of the United States Corporation Quigley Company. They admit to producing only three products that contained asbestos; Insulag, Panelag and Damit Joint Compound. The Insulag and Panelag product line was an extensive inventory of refractory materials to be used in high heat situations.

When Quigley trademark registered the name Insulag in Canada in 1937, the product was described as “plastic refractory lagging and finishing high temperature thermal insulating material”. The plastic was made with a high concentrations of asbestos.

Quigley Canada was located on 20th Avenue in Lachine, Quebec.  Quigley Canada registered another trademark for a product called Insulbrix, a lightweight insulating fire brick.  The trademark office information does not confirm that asbestos was included in this product.  Quigley abandoned the trademark in 1981.

Quigley products were primarily used in the iron, steel, power generation, petroleum, chemical and glass industries although they were used in many other industries that involved heat including paper mills and shipyards.

The Quigley Company was purchased by pharmaceutical giant Pfizer in 1968.  At that time Pfizer was attempting to diversify and Quigley formed a large part of its mineral and metal division.  In 1991, facing growing asbestos liability claims, Pfizer decided to concentrate on health care and Quigley left the refractory insulation business.  Pfizer could not dissolve the Quigley company as the corporation had been named as a defendant in over 160,000 cases.

Pfizer eventually sought Chapter 11 Bankruptcy protection for Quigley, including Quigley Canada, in 2004.  It is estimated that claims against the company at the time of the commencement of the bankruptcy proceedings were in the range of $5.6 Billion. After significant negotiation a plan to pay compensation to victims of Quigley Company's negligence was approved in 2013. There were allegations made that Pfizer negotiated the terms of the reorganization plan in bad faith and under valued company assets. The compensation trust opened August 11, 2014.  Pfizer funded the asbestos compensation trust with cash and company stocks valued in the amount of $826 million.

Pfizer has no further involvement with claims against Quigley as a result of this action as all asbestos liability and injury claims are directed to the trust for assessment and payment.  Pfizer joined many other asbestos manufacturing companies in shedding their asbestos liability by proceeding in this fashion and cannot be sued for injuries caused by Quigley Company products now, or at any time in the future.

If you worked with Quigley products and have developed mesothelioma, claims can be put forward on your behalf to the Quigley Asbestos Trust by contacting us.