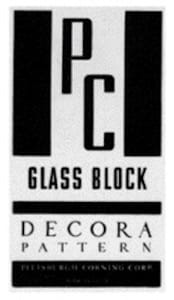 The Pittsburgh Corning Corporation was a joint project embarked upon by the Pittsburgh Plate Glass Company and the Corning Glass Works in 1937. The company was based in Pittsburgh, Pennsylvania where PPG had its home base. All was well while they stuck with their core business, being architectural glass block and other glass-based building and insulating materials. The ™ logo as pictured was registered in Canada in 1938, three years after they had expanded into the Canadian market.

In 1941 PCC started making and distributing FOAMGLAS™. Foamglas contained no asbestos and was a cellular glass insulation used primarily in the construction industry. The trademark for FOAMGLAS was registered in Canada on December 31, 1945, although there is evidence that it was distributed in Canada before registration of the trademark.

In 1962, with a goal of expanding their insulation business as FOAMGLAS was proving to be lucrative, Pittsburgh Corning purchased a product line of insulating materials from the Union Asbestos and Rubber Company (UNARCO).

Pittsburgh Corning purchased the name, patents, formula, equipment, and a facility in Tyler, Texas. They took over as the employer for the former UNARCO employees. The product line was called Unibestos and was made with amosite asbestos imported from an asbestos mine in South Africa. Amosite asbestos is grey coloured, unlike the Canadian mined chrysotile asbestos which appears white or cream coloured.

While all asbestos is dangerous, amosite is especially so as the strands are long and brittle. Microscopic particles easily dislodge and become airborne, contaminating the air of anyone installing, disturbing or removing the insulation. The asbestos was shipped in burlap sacks from South Africa endangering stevedores and transportation workers along the way. There were no warning labels on the sacks.

The Unibestos product line had been developed by UNARCO in 1936 for insulating stainless steel and other industrial pipes. Unibestos was designed for use when the pipe temperature could reach 1500° F. Unibestos insulation was a corrosion resistant, durable, pre-formed, heavy-duty pipe insulation widely used in petrochemical and power plants and a host of other high temperature steam pipe settings. Installing pre-formed insulation was less labour intensive than wrapping the pipes with chicken wire and then applying the asbestos mud by trowel or hand. This fact alone made it popular with insulators who were never warned of the danger of installing the insulation material.

In many industrial settings insulated pipes are painted shortly after the insulation is installed. This was not done for aesthetic purposes, but to aid identification for future workers. This put industrial painters at risk of exposure to pipe insulation.

Unibestos was so successful for the company that they opened a second manufacturing facility in Port Allegany, Pennsylvania, where they already operated a plant that produced architectural glass building blocks and foamglas Insulation. This facility was expanded to produce Unibestos for the eastern US and Canadian markets in 1964.

In 1972 Pittsburgh Corning discontinued the manufacturing of Unibestos. The Tyler, Texas plant was dismantled, and the equipment and machinery buried. This was following the report of a physician that worked for PCC from 1964 until 1971 who warned of the danger to employees and anyone who worked with Unibestos.

The original developer of Unibestos, UNARCO, filed for bankruptcy in 1982. They have an asbestos trust that was established in 1990. The trust is set to close in 2019 and will only accept claims until December 31, 2018. Trust assets have been fully depleted by the number of claims filed as UNARCO made many asbestos products additional to the Unibestos product line they sold to PCC.

When it became apparent that claims for injury caused by Unibestos were not going to be compensated by UNARCO, injured persons started to pursue Pittsburgh Corning. It has been established in other asbestos liability cases that liability for a product line would be transferred to the purchaser provided that they purchased substantially all of the company. PCC was found through various court decisions to be responsible for the Unibestos product line.

Pittsburgh Corning voluntarily filed for bankruptcy protection on April 16, 2000 when it was estimated that 100,000 personal injury lawsuits had been filed against the company. A plan to establish a compensation trust for persons injured by the Unibestos product line was finally approved after 17 years in Bankruptcy. The Pittsburgh Corning Corporation (PCC) Trust opened for claims submission on March 21, 2017.

If you or a loved one believes that being exposed to Unibestos insulation caused or contributed to your mesothelioma or other cancer, contact us now to learn how we can help you file a claim with the Pittsburgh Corning asbestos trust.