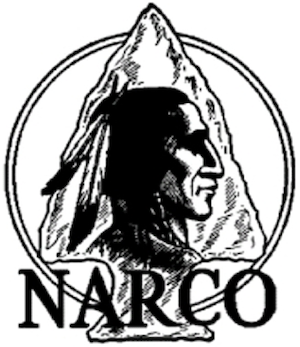 The North American Refractories Company (NARCO) registered this ™ in for use in Canada in 1944. The Company was based in Cleveland, Ohio.

This logo was first used on products in Canada in 1937. NARCO products were used in many high heat industries in Canada, including petrochemical and power plants.

Most refractory products historically contained asbestos. In 1944 when the logo was being formally registered NARCO’s product line up was listed as fire brick, fire clay, mortar, silica cement, fire clay mixture and plastic brick setting or covering material. No mention of asbestos but the term plastic was often used by manufacturers of asbestos products to avoid giving up trade secrets. An additional clue is the use of the word fire in the description of the brick and clay.

NARCO admits to producing 29 products that contained asbestos. Two of their products, Vercast and Aetocast 20 were produced and distributed only in Canada. These products contained asbestos until April 15, 1988 much later than most other companies stopped using asbestos.

Honeywell owned NARCO from 1979 until 1986 when they sold the company to AHN Refractories who formed a family of refractory makers which includes Harbison Walker and A. P. Green. In 2002 NARCO applied for protection under the Chapter 11 provision of the United States Bankruptcy Code to shed its pending 300,000 asbestos claims as well as liability for future injury claims.

The NARCO Asbestos personal injury trust opened in October 2013 after a long negotiation over trust funding.

NARCO Canada had a location in Sault Ste. Marie, Ontario which location has not been acknowledged by the NARCO asbestos trust as being a presumptive work site. Brown Law is attempting to correct this oversight.

If you worked with or were exposed to NARCO products contact us if you have been diagnosed with an asbestos disease.