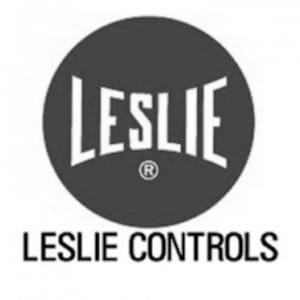 Canadian born entrepreneur John Leslie patented his first major idea, a steam powered locomotive snow plow in 1894. He went on to patent many other industry leading products most importantly valves to control steam. He operated his business, being a foundry and machine shop in Lyndhurst, New Jersey where just after the turn of the century he was manufacturing a line of reliable steam pressure valves and regulators. From this foundry Leslie Controls was able to become a major supplier to the US and Canadian military through both WWI and WWII making an ever-widening range of steam control equipment for use on Military and Merchant Ships.

With peace, Leslie Controls was able to concentrate their efforts or developing a range of valves and controls for use by industrial and utility customers. Having effectively moved into the Canadian market during the frenzy of ship building during the wars, Leslie Control had a reputation for quality products which they relied on as Leslie expanded into the power generation sector of the market.

Leslie controls moved into a much larger facility in Parisippany, New Jersey (just east of Newark) in 1948 where they continued to build and expand their line of products. This location was their production facility for “self-operated temperature and pressure control valves, internal pilot, piston or diaphragm operated valves or governors for controlling the flow of fluids in response to pressures, differential pressures, pump discharge pressures, controllers and thermostats controlling an auxiliary fluid such as air, gas, water or oil."

A year later, in July 1949, Leslie word marked their name for their range of valves and controls in Canada.

Leslie Controls products included asbestos gaskets, valves seals, insulation, rope and sheet packing. The company did not manufacture the asbestos containing materials but purchased them from other companies and included them in their finished products. Leslie Control products were then used aboard military and merchant ships, power plants and other industrial settings from the 1940s to the 1980s.

Products such as the classic DLO control line valve and the Super “G” series of regulators were cast and assembled in the Parsippany Plant.

When Leslie Controls outgrew their New Jersey home, they moved south to a larger 150,000 square foot facility purpose built in Tampa, Florida. They operate from this facility to date.

With a growing number of personal injury claims by employees and workers who worked with their products between the 1940s and the1980s, Leslie Controls sought the protection afforded to them by the bankruptcy courts and filed a voluntary Chapter 11 bankruptcy petition in July 2010. At that time Leslie Controls was defending over a thousand mesothelioma claims.

To deal with their asbestos liability Leslie Controls agreed to establish a claims fund for victims of their negligence. There is sufficient evidence that management at Leslie Control was advised of the danger of including products that contained asbestos in their valves decades before it became public knowledge.

Capital in the amount of $75 million was paid by Leslie’s parent company as well as proceeds from various liability insurance companies provided funding for the trust. The plan was approved in February 2011 and the trust was established and opened to review and pay claims in March 2012.

Leslie Controls pays injury claims for exposure to their products that occurred before December 31, 1986. Higher compensation is paid for workers exposed on ships or in power stations than those that installed Leslie Control products during a new build. This is based on the presumption that repair and maintenance of Leslie Control valves and regulators exposed those workers to more asbestos fibers than during the installation process when the asbestos gaskets and packing was contained within the unit.

If you believe you or a loved one has mesothelioma caused by working with products manufactured and distributed by Leslie Controls, please contact us to discuss options for compensation.