Lake Asbestos of Quebec (LAQ) Mine

In and around Lake Noir (Black Lake) Quebec, asbestos was being mined as early as 1880. A collection of miners, farmer and loggers established a village near the mine on the shores of Black Lake. Although most of the residents of the area were French, the English name, Black Lake, was the one adopted for use.

The Village was moved south early in the 20th century to accommodate mine growth, but kept the name for the town. Black Lake is located just southwest of Thetford Mines following the Saint Joseph Fault, which is a long band of peridotite altered serpentinite rock which connects the Quebec asbestos mines. Numerous small mines were opened in the Black Lake area.

It was in the mines belonging to Scottish Canadian Asbestos and American Asbestos at Black Lake that engineer John J. Penhale developed his asbestos-milling technique in 1888. This revolutionized asbestos mining and it led to more and larger mining operations. The asbestos no longer needed to be entirely extracted from the rock by hand although most still was, due to the high cost of equipment and the low cost of the manual labor force.

The mining company, Scottish Canadian, declared it was insolvent in 1890. The American Asbestos Co. purchased the mine from its creditors and continued the mining operation. The pits were eventually joined and became the smaller pit or well of the Lake Asbestos of Quebec mine.

Asbestos miners worked in shifts day and night, all year round. Only bitter winter weather closed the mines. The market demand was increasing, and mine profits rose. Mine ownership was ever fluctuating with new partnerships and companies formed to raise capital and maximize profit. The Glasgow & Montreal Asbestos Co., Standard Asbestos Co. Ltd., United Asbestos Co. Ltd., and Thetford Mines Asbestos Company were but a few players in the ever-growing asbestos market. Asbestos was marketed at that time as a miracle material, both lightweight and fireproof. There was a rush by many manufacturers to produce products containing asbestos.

The American Smelting and Refining Company (ASARCO) was a Tucson, Arizona based major world leader in copper, lead, zinc, silver, and gold mining. They had smelters and mines in Texas, Arizona, Tennessee and Montana. ASARCO started as a private corporation but had been a publicly traded company since 1907. In the early 20th century ASARCO expanded and had profitable copper mines in Peru and Mexico and Australia.

The Lake Asbestos of Quebec mine company operation was immediately expanded by ASARCO. Smaller open pit mines that had been under separate ownership before LAQ were joined. Exploration work done by ASARCO had discovered a large asbestos deposit below and around Black Lake. In late 1952 the Lake Asbestos of Quebec company started to dredge and drain Black Lake to get to the asbestos beneath the lake. By 1958 the lake was emptied and open pit mining continued. The dredging and draining was done by a company called Kaiser Gilpin, also owned by ASARCO, and immediately dissolved after the project was complete. This was standard procedure for ASARCO to avoid liability for any construction related worker injuries. 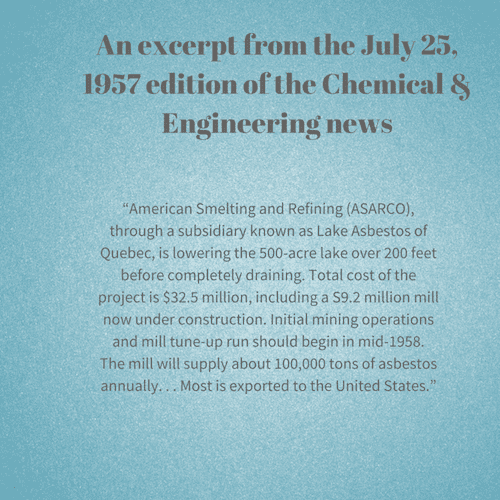 Lake Asbestos of Quebec (Lac d’Amiante du Quebec) sold raw asbestos to other ASARCO subsidiaries including the CAPCO Pipe Company and the Cement Asbestos Products Company. Their other customers were manufacturing companies, including Armstrong, Celotex, Garlock and Owens Corning/Fiberboard. In less than twenty years from the time ASARCO formed Lake Asbestos of Quebec it became the second largest producer of asbestos fiber in the western world. The largest pit, being the drained Black Lake, measured 1.7 km by 1.5 km. Over 100 thousand tons of asbestos fibres reached the manufacturing market from the LAQ operation at Black Lake annually.

As the understanding of the danger of asbestos use grew, LAQ developed new markets, primarily in India and Thailand. ASARCO and LAQ were facing mountains of injury claims throughout the 1980s. ASARCO ultimately sold the LAQ mine in 1989, but continued to be liable for injury caused by its mining operations and manufactured products.

Asbestos mining continued with new ownership until 1997. All the raw asbestos was exported. After closure the mine became a tourist attraction and an observation deck was set up off Highway 112. The lake began to refill from rain and groundwater. A landslide in 2012 collapsed the highway into the southwest area of the mine, shutting down access to the observation deck. A new bypass opened in 2015 as part of the mine continues to operate as a quarry. The mine name under the new owners was changed to LAB as they also purchased the Bell mine and ran both as a single company.

ASARCO sold its Southern Peru Copper Corporation in 2002 for $2.5 billion to a subsidiary company, Grupo Mexico. Due to concerns about ASARCO using the bankruptcy to avoid liability the U.S. Justice Department required ASARCO to set up a $100 million trust fund for existing environmental obligations at over 90 sites in the United States. This fund does not address personal injury.

Lake Asbestos of Quebec was included in the 2005 filing by ASARCO for Chapter 11 bankruptcy.

The ASARCO Asbestos Personal Injury Settlement Trust opened in 2009 with ASARCO contributing $750 million to fund compensation for asbestos victims. Exposure to LAQ fiber or products manufactured by LAQ customers entitles injured parties to apply to this fund.  It is known that Garlock, Owens-Corning, Celotex and Armstrong purchased raw asbestos from the LAQ mine.

If you were exposed to LAQ raw asbestos or worked with Armstrong, Garlock, Celotex or Owens Corning/Fiberboard products and have been diagnosed with mesothelioma, compensation can be claimed. Other manufacturers periodically purchased LAQ fibre including the Abex and Bendix brake companies. If you have been diagnosed with mesothelioma, please contact us  to get your compensation claims started. 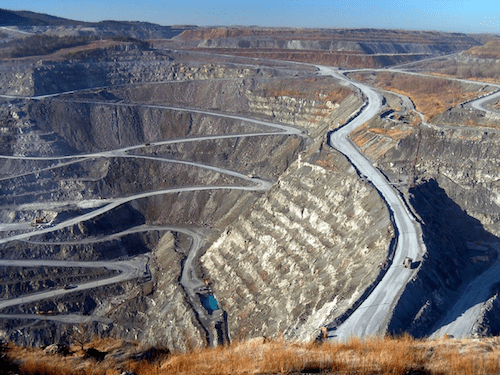