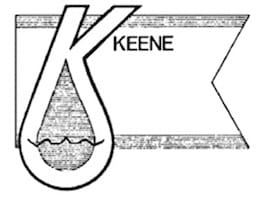 The Keene Corporation of Cookeville, Tennessee registered this trademark in Canada in 1974 for use on their marine bilge water discharge control units.

The Keene Corporation got into asbestos trouble by purchasing an insulation company called Baldwin-Ehret-Hill in 1968. Until then they were simply a packaging company that did not use asbestos in any of their products.

Ehret Magnesia was founded in 1877 in Valley Forge (18 miles NW of the city of Philadelphia) Pennsylvania where they purchased a number of limestone quarries. Ehret quarried more that limestone as they were interested in other minerals that could be mixed with imported asbestos fibres to form their successful line of Enduro cement and insulating products.

Throughout the 1930 Ehret ran monthly advertisements in the Asbestos magazine which was widely read by both manufacturers and buyers of asbestos products. Articles about asbestosis were published as well. Testimony of a former employee, a chemist by the name of John McAlister, revealed that Ehret hired him in 1952 to develop a calcium silicate insulation. The workers who were involved in the development and manufacture of this insulation product were required to wear respirators which had been selected by McAllister. Yet when the insulation left the plant, the packaging contained no warning labels. While management and senior employees at Ehret were concerned about the emerging information about the danger of asbestos, they did nothing to protect their customers.

The Baldwin-Hill company patented their method of making mineral wool insulation. The process involved using a mixture of inorganic fibres being, glass wool, mineral (rock or slag) wool and asbestos fibres, combined with a resin mixture to form block and board insulation.

Baldwin-Ehret-Hill Inc. was formed when the two previous rival manufacturers merged in 1959. Their products lines complimented each other, and Baldwin-Hill had a better method of making the insulation and at lower cost.

In the early 1970s some asbestos product manufacturers started to listen to medical research as their employees were becoming disabled and dying. Workplace compensation claims and lawsuits were on the rise against Keene from employee that had been around in the Ehret and Baldwin-Hill days. Keene closed the Valley Forge operation in 1974 in response to a growing number of injury claims.

Asbestos was found in 1997 during installation of underground fiberoptic cables in the natural amphitheater that had been created in one of the disused quarries. Investigation into the discovery uncovered the fact that Ehret had been dumping asbestos waste into the abandoned quarry situated within the park. A slurry pipe to carry the waste had been installed into the former quarry with the approval of the state of Pennsylvania.

The public access to that area of the park was immediately restricted while the extent of the environmental hazard was assessed. The State of Pennsylvania and the National Park Service commenced a program to deal with the dangerous waste which included lead, mercury and arsenic additional to asbestos.

Eventually in 2012 a remediation contractor was retained to remove the hazardous material. Remediation of the site took more than two years. The Amphitheatre reopened to the public in 2015.

Keene was facing many lawsuits from workers who had been exposed at their factory as well as insulators who has installed their products in industrial settings. In an attempt to resolve asbestos litigation Keene formed a holding company called Bairnco. This solution was a only a temporary fix and the Keene Corporation filed for Chapter 11 Bankruptcy protection in 1993.

The Keene asbestos creditors Trust was funded with $64 million in 2006. Because the trust has limited assets it does not consider or pay claims for pleural plaques or mild asbestosis. Even mesothelioma claims receive only $1,375 after application of the 1.1% payment percentage. To ensure maximum funds reach the injured party a 25% fee cap is imposed on lawyers submitted claims to this trust.

Claims previously submitted to the Eagle Picher trust can be processed by the Keene trust on an expedited basis as they will rely on the disease categorization done by EP in a further attempt to protect trust assets. Eagle Picher and Keene asbestos claims are managed by the same settlement facility.

If you or a loved one have been exposed to asbestos and developed asbestosis, cancer or mesothelioma contact us to learn more about your compensation options.