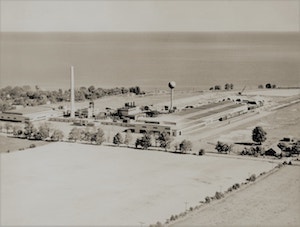 Johns-Manville started operating in Canada in 1918 when it purchased the world’s largest Asbestos mine, being the Jeffrey Mine, in Asbestos, Quebec. The Jeffrey Mine opened in 1879 when Asbestos was discovered and deemed a “miracle mineral” or “white gold”. There were later four other asbestos mines in the vicinity, being the Carey Mine, Bell Mine, Lake Asbestos of Quebec (LAQ) and Flintkote Mine owned by rival corporations which are discussed on their own pages.

The Jeffrey Mine operated continuously until 2011 but for a period in 1949, when the most bitter and violent strike in Canadian History took place. The strike started on February 14, 1949 when 5000 miners at the Johns-Manville, and three other asbestos mines in the area, illegally walked off the job demanding better working conditions and pay. Violence ensued when Johns-Manville brought in strikebreakers to work in the mines to keep them open. Clashes between the police and miners resulted in the Riot Act being read by a Justice of the Peace in Sherbrooke, Quebec, enabling the police to arrest any person not remaining in their home or place of work. A settlement yielding little to the miners was eventually negotiated in June 1949 and many miners lost their jobs permanently. Knowing now that breathing asbestos dust is deadly, it is impossible not to have sympathy for those miners who wanted protection from breathing in asbestos laden dust. The Bankruptcy Trustees of  Johns-Manville sold the mine in 1983 to a group of employees who operated the mine as JM asbestos until 2011.

In 1949 Johns-Manville opened the Munro Mine near Matheson, Ontario. The mine was abandoned in 1964 but the tailing piles remain causing ongoing environmental hazard.

Johns-Manville, using a subsidiary name of Advocate Mines Ltd. opened an open-pit mine in Baie Verte, Newfoundland. This mine operated continuously from 1963 until 1981. It reopened under the name Baie Verte Mines Inc in 1982. In 1991 Tera Nova took over the mine and converted it from an open-pit mine to a wet processing mine and continued to mine asbestos until it was permanently closed in 1995.

Asbestos, Quebec, in addition to the mine operation had a manufacturing facility producing asbestos paper and millboard, asbestos textiles, packings, heat-insulation materials, asphalt and asbestos-cement roofing and siding. Friction materials (brakes and clutch parts) were also manufactured in a separate plant located adjacent to the mine.

The Johns-Manville Port Union plant located at 5421 Lawrence Avenue East, on the SW corner of Port Union and Lawrence in West Hill, Scarborough Township, Ontario, opened in 1946. Johns-Manville transite pipe was manufactured and stored at this facility.  Transite is the name trademarked by Johns-Manville and was the only manufacturer who could use the term.

Transite Pipe is made with asbestos and concrete and is commonly used as water main pipe. Many industrial complexes and city sewer systems have this pipe to this day. The transite pipe plant was the first of its kind in Canada and the facility held seven transite pipe production plants. Over 600,000 miles of transite pipe was installed in the 1960s with much of it having been made at the Port Union Johns-Manville pipe plant. The pipe plant continued to operate until  Johns-Manville declared bankruptcy in 1982.

The Johns-Manville Port Union plant site was also used as an asbestos disposal site when the company built a dike system into the wetlands at the mouth of Highland Creek where it meets Centennial Creek. Former Johns-Manville employees have reported using bulldozers to push pipe fragments and other asbestos debris into Lake Ontario when the asbestos disposal site was full. The Ministry of the Environment approved, as part of the decommissioning plan related to this site, that all remaining asbestos waste would be placed in the settling ponds and capped with clay. The site has been designated as a waste disposal site but considered remediated and is now a park.

Unbelievably, a residential townhouse complex has been developed immediately adjacent to the former John-Manville property with the property also deemed to be remediated.

The Port Credit head office and construction division opened in 1954 at 565 Lakeshore Road and produced asbestos containing building materials until the property was sold in 1977 to Canadian Admiral who operated their Radio and Television manufacturing facility next door. The Lakeshore plant produced roofing material, asbestos insulation, acoustical tiles, electrical insulation, rubber products, and textile products all of which incorporated asbestos from the Jeffrey Mine. This site remained vacant while millions of dollars were been spent on cleaning up the land.  In May 2019 construction of a residential townhouse complex on this "remediated" property is underway.

The Johns-Manville head office and building division moved to Etobicoke in 1977 and operated until the company collapsed in 1982. Johns-Manville was facing ever increasing financial pressure due to asbestos litigation as Johns-Manville employees and customers were dying from mesothelioma and other asbestos related diseases and taking action against the company.

Johns-Manville operated a production facility in North Bay, Ontario that produced wood fiber insulating board and allied products such as acoustical ceiling tiles, wall plank and Weathertite sheathing. This facility processed asbestos from the Munro Mine until it closed and then asbestos from the Jeffrey Mine was shipped to North Bay by rail.

Johns-Manville operated sales and warehouse facilities in Montreal, Quebec, Winnipeg, Manitoba and Vancouver, British Columbia. They had salesmen who promoted and sold Johns-Manville products all over Canada. From the warehouses teams of insulators were dispatched to various industrial facilities, including pulp and paper mills and oil refineries. There was a division for residential insulation where a truck and a team of workmen could blow in asbestos wool insulation. The workforce across Canada employed by non-mining or manufacturing operation was reported to be as high as 6,000 in 1967.

Johns-Manville (US) filed for Chapter 11 Bankruptcy on August 26, 1982 with the Canadian operations quickly following. Manville emerged from the bankruptcy in 1988 with the creation of the Manville Trust to compensate any current or future claimants. The Manville Trust was underfunded and cannot fully meet its financial obligations to victims of their asbestos negligence. Manville claims are paid at 5.1% of the full pre-determined claim value determined by disease level.  This was the first asbestos trust established, and many other corporations have followed.

The Johns-Manville Port Union Transite Pipe plant’s location is 22 kilometers from our office and many former Johns-Manville employees live in the east Toronto and Durham area. Some of the information in this article was obtained by personal discussions with them.