The Mogul Metal Company was a subsidiary of a company called the Muzzy-Lyon company founded by Howard Muzzy and Edward Lyon. Muzzy and Lyon set up Mogul to go into a new business to manufacture Babbitt bearings with a new metal formula. Mogul made their bearings by using a die-cast process, which in 1899 was an innovation in bearing making.

Another company, Federal Bearing and Bushings, was making similar products. A merger of the two in 1924 resulted in the Federal-Mogul Corporation.

The company was originally located in downtown Detroit. The vehicle manufacturers based in the Detroit area were the primary purchasers of Federal-Mogul bearings. Federal-Mogul quickly expanded their product line to meet the demands of the assembly facilities in Detroit. The company reported sales of $4.8 million in 1929.

Throughout the 1930s Federal-Mogul continued to acquire other engine parts manufacturing companies and increased their market share of original equipment and after market combustion engine parts. Watkins Rebabbitting Toronto Limited, a Canadian company, was acquired in 1937, Federal-Moguls first non-USA purchase.

WWII was a significant game changer for Federal-Mogul. War production required metal bearings and Federal-Mogul was more than happy to supply them. In 1947 the company had 6,200 employees and sales reaching $85 million.

Federal-Mogul continued its path to global success, expanding into Europe in 1960. Throughout the 1960s there was continued growth and profits were good, with sales reaching $263 million in 1969.

In 1965 Federal-Mogul purchased the assets of a company called Vellumoid. Vellumoid made gaskets used in automobiles that contained between sixty and eighty percent chrysotile asbestos. The Vellumoid company did not actually manufacture the sheet material from which they stamped the gaskets, but they were made by outside supply contractors to Vellumoid’s specifications. The brand name used for Vellumoid’s gaskets was “Velbestos”. The first injury claim filed against the Vellumoid company was in 1985 with the allegations being that the removal of gaskets from engines caused the Plaintiff to inhale asbestos fibers when scraping stuck gaskets off engine parts. Claims filed against Federal-Mogul for exposure to Velbestos gasket exposure were litigated on a case by case basis.

The next three decades were years of continued profits and growth. Federal-Mogul continued to aquire other companies that made and developed auto, boat and aircraft equipment. It appeared that the company was rock solid, with sales topping $5 Billion in 1995.

Everything started to go wrong in 1997 when management at the company made some disastrous company acquisitions.

Fel-Pro was a manufacturer of automobile gaskets, sealants, and adhesives in Skokie, Illinois. The company was started in 1918 as Felt Products Manufacturing Company by Albert Mecklenburger and Hugo Herz. Their first product was felt seals for the Model T Ford. The product line was expanded in 1923 when gaskets, cork and metal seals were added. Asbestos was introduced to the sheet gasket material that Fel-Pro purchased in 1941 as it was learned that asbestos improved the durability of gasketing material when heat was an issue in combustion engines. With this new improved line up Fel-Pro’s gaskets were used beyond automotive applications and were installed on hundreds of Navy ships.

Fel-Pro made a full line of gaskets for automobiles including brands called shim-bestos and felbesto-prene, although none of the patent or trademark filings indicate asbestos was a component. Fel-Pro gaskets were blue to distinguish them from other suppliers.

Fel-Pro was family owned and run for 80 years. In 1998 the company was purchased by Federal-Mogul. At the time the firm had annual revenues of $500 million and had a 60 percent market share for its aftermarket gaskets. Federal-Moguls management style reduced the facilities productivity and many employees were fired or quit. Fel-Pro’s market share dropped dramatically with customers finding other gasket sources when Federal-Mogul was not able to fill their orders. This together with increased numbers of asbestos injury claims contributed to the eventual bankruptcy of Federal-Mogul in 2001. At the time their bankruptcy, Federal-Mogul reported that there were 33,625 active claims relating to Fel-Pro exposure.

Turner & Newall had their fingers in every pot, making everything from textiles to auto parts through various wholly owned subsidiary companies. Their reach in Canada extended to Atlas Asbestos and the Bell Asbestos Mine. The Bell Mine had a mill where T&N manufactured construction materials for the Canadian market.

It is reported that the Turner & Newall Group was the worlds largest asbestos conglomerate. Facing thousands of worker’s compensation claims in the United Kingdom the whole group was sold to Federal-Mogul for an undisclosed sum. Federal-Mogul thought they were getting a bargain, even with the assumed asbestos liability.

Ferodo joined the T&N group in 1925. Ferodo manufactured and supplied friction products including, but not limited to, brake linings and pads. Ferodo operated out of facilities in the UK.

In 1977 Turner & Newall decided to expand their friction products line in North America and the Nuturn Corporation was incorporated in Delaware, although their manufacturing facility was in Smithville, Tennessee. Nuturn products were distributed under the trade names of “Grizzly”, “Worldbestos” and “Leland”, product lines purchased from the Maremont, Lear Siegler and Worldbestos corporations. Some of their disc pads, clutch facings, heavy duty brake linings and drum brake linings continued to contain chrysotile asbestos until the late 1990s. 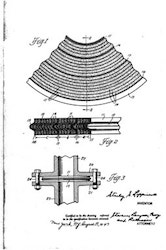 Flexitallic’s claim to fame was the spiral wound gasket developed in 1912. This image comes from the Canadian patent office where the company finally got around to registering their patent in 1947. No other company made a gasket like the Flexitallic spiral wound gasket until the 1940s, so Flexitallic had full market dominance. This gasket was designed not to leak in high temperatures, where the gaskets would also be required to withstand high pressures. The main material used in Flexitallic’s gaskets was asbestos.

Oil refineries were the target market for Flexitallic, but they did not discriminate about selling to other industries where gaskets for high heat and steam systems were required. This included pulp mills and power plants. Flexitallic was purchased by Turner and Newall in 1959.

Another gasket company operating from Rochdale, (Greater Manchester) that had been in business since 1871, Wood Brothers Gaskets Limited, was purchased by Turner & Newall in 1970. This company was renamed Flexitallic and became the United Kingdom end of the business.

Flexitallic became a subsidiary of Federal-Mogul when they acquired Turner & Newall in 1998.

Facing over 100,000 asbestos personal injury claims, Federal-Mogul filed for Chapter 11 bankruptcy protection in the United States, and administrative protection in the United Kingdom on October 1, 2001. At that time the company employed 4,500 in the UK and almost 20,000 in the USA. Although the company managed to stay in business, pension funds were decimated, and the stock lost 99% of its value.

In keeping with precedent set in the USA by other bankrupt asbestos using corporations, negotiations commenced with plaintiffs and their lawyers. In 2007 Federal-Mogul agreed to fund two trusts to compensate asbestos victims, one in the US and one in the UK. The US trust was funded with $635 million. Canadian based exposure to Federal-Mogul and any of its entities requires application to the US trust. Exposure that occurred outside of North America requires application to the UK trust.

Until recently the US Federal-Mogul trust had three separate coffers of money to compensate those exposed. Those exposed to Turner & Newall, Ferodo America or Flexitallic asbestos containing products are compensated at 8.8% of a set claim value for each disease level. Claims to the US trust have a relatively streamlined application process.

In September of 2018 the Federal Mogul Products trust sub-fund finally opened to compensate those injured workers who had contact with Wagner Electric asbestos containing materials.

If you have been diagnosed with mesothelioma after working with any materials manufactured by Federal-Mogul or any of its subsidiary companies, please contact us to obtain information about how to apply to the Federal-Mogul personal injury trust. We would be pleased to answer any questions you may have at no cost or obligation to you.