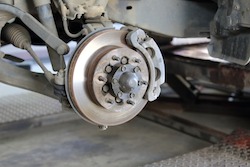 Friction products are used in multiple industries including trains, planes and automobiles. Any person involved in the repair of braking systems for these modes of transportation continues to be at risk of exposure to asbestos.

Asbestos was first used as a brake component when asbestos cloth was inserted to line the brake to minimize wear in 1906. Rigid molded brake shoes were developed in the 1930s by companies such as Bendix, Abex and Ferodo.

Historically brake linings and brake shoes contained 50% asbestos. While asbestos use has dramatically declined over the past few decades, little was done to remove asbestos from friction products. Asbestos has only recently become a banned substance and brake pads made in other countries were regularly imported into Canada until December 30, 2018. The Canadian Border Services Agency has figures that indicates that 333,000 sets of automobile brake pads containing asbestos were imported into Canada annually. The average increased cost to the consumer of brake pads that did not contains asbestos was $5.

The heavy use of asbestos in braking products is the reason that railway workers have a high rate of asbestos disease. The dust caused by bringing a freight train to a halt contains sufficient asbestos particles to endanger workers in the entire rail industry.

It is not visibly possible to tell if the brake or clutch parts you are working with contain asbestos and it is therefore good to make the assumption that they do. Although the ban kicked in at the end of December 2018 there may still be new old stock for many years to come. There is only one brake manufacturer left in Canada, ABS/Ideal Friction products in Guelph, Ontario. The brake products made by this company do not contain asbestos. You can support a Canadian business and be assured that your brake parts do not contain asbestos when you purchase aftermarket replacement parts. If you are having work done on your automobile you can request that the mechanic install non-asbestos containing brakes. If you do not discuss this with the garage they will usually use the most cost effective brake parts and that means imported materials that may contain asbestos.

Beware of any brake products that originate in Asia. Asbestos mining continues in China and as the Canadian asbestos ban is still relatively new you can assume that any brakes that are imported from Asia contain asbestos. For many years asbestos mined in BC at the Cassiar Mine was shipped to Thailand and South Korea where it was incorporated in friction products that were sold back into the North American market.

Most, if not all, auto mechanics use an air gun to clear the dust during automotive service work. This pushes the debris and dust into the air increasing the probability of asbestos particles being inhaled. It moves dust onto other surfaces where it settles, only to be disturbed again when cleaning is done.

Workers involved in installing tires, tire rotations and other work that involved working around or near installed brakes may also be at risk of inhaling asbestos fibres for many years to come. As the brakes wear, residue builds up around the tires. This is disturbed when the tires are removed. It only takes a minuscule spec of dust breathed in to cause mesothelioma.

Vacuum systems are available for service garages to deal with brake dust. Even when a service station has a vacuum system available, mechanics are not likely to use them. Auto mechanics are often paid a flat rate and working quickly is important to their paycheque. The chances of a mechanic breaking the habit of a lifetime and stopping the use of an air gun to clear the area in favour of a vacuum system are slim. Wetting down the work area was recommended at one point but testing found that applying water simple sent the dust into the air.

While the asbestos ban has now in place, there has been no indication how imported products are going to be tested so that the ban can be enforced.   Is the Canadian Border Agency testing for asbestos in brake products that are imported into Canada? The low cost of asbestos still makes it an appealing product for manufactures who do not care about their workers health and safety.

The historic use of asbestos in brake parts has put generations of brake mechanics together with any other garage workers at significant risk. If you or a loved one worked with friction products and are suffering from an asbestos caused disease, contact us to discuss your compensation options.