Chrysotile asbestos was discovered in Thetford Township, Quebec in 1876 by a farmer named Joseph Fecteau on land over which Robert Grant Ward, an Irishman, owned logging rights. Ward purchased, in 1878, the mining rights on his 218 acres of land from the Crown for the sum of $1 per acre. Simultaneously the King brothers and the Johnson brothers purchased Crown land grants on adjoining plots.

Robert Ward sold approximately 100 acres of his land to the Asbestos Packing Company of Boston for $4,000. It was the start of the “white gold” rush to this area and neighbouring Coleraine township. Asbestos had been known and used for over 2000 years but it was at the Canadian asbestos mines in Thetford Township where asbestos was first mined on a large scale commercial level.

Chrysotile asbestos is white. It occurs naturally as long, thin fibers that appear similar to fiberglass and feels like silk thread. It does not burn which led to asbestos being used for many high temperature applications including textiles and pipe insulation.

The initial open pit mine extracted ultrabasic rock. The ore had to be taken from the pit to the mill, where the chrysotile asbestos fibre was separated from the serpentinized rock. This work was at first done with a hammer by young boys and women called cobbers. The ore was dug by pick and shovel by the men and transported by horse and cart from the pit. Bell mine was the first mine to employ women as mine workers.

In the summer of 1888 the Boston Asbestos Packing Company sold part of its land to Bell's Asbestos Company of London, England for £41,300. Thereafter the mine became known as the Bell mine after the founder of the Bell Company, John Bell.

The Quebec Central Railway constructed a line to the Bell Mine which transported the raw asbestos from the mine north, to ports on the St. Lawrence River, or 60 miles south to the US border. 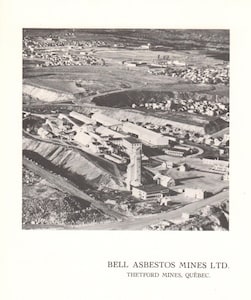 A dispute arose between Bell’s Asbestos Co and neighboring Johnson Company over property lines in 1889 which was eventually decided by the Supreme Court of Canada in 1894. The land in dispute was asbestos rich and the boundary stakes could not be located. The Crown Patent Office could only determine two points of reference in their deed records. The Court appointed a surveyor and found against Bell, ordering the Bell Asbestos Co. to pay the Johnson Company the sum of $7,145, being the value of the asbestos removed from Johnson's Company land.

John Bell pioneered the manufacture of engine packing and jointings using asbestos shipped to England from the Canadian Bell mine. The English end of the manufacturing branch of the corporation was Bell’s Asbestos and Engineering Limited. This company grew and expanded throughout the early 20th century producing a wide range of asbestos textile products using the trade name of Bestobell.

In 1906 Bell sold part ownership of the mine to an American manufacturing firm, Keasbey & Mattison.

The Keasbey and Mattison Company was founded in 1873 in Philadelphia, Pennsylvania, by Henry G. Keasbey, and Dr. Richard V. Mattison, a chemist/pharmacist. The company originally manufactured and marketed patent medicines developed by Dr. Mattison. Working in a company laboratory, Mattison discovered that a mixture of asbestos and magnesium carbonate would adhere to hot metal pipes, and could be turned into an insulation material for steam pipes. Asbestos and related building products soon became the focus of the company. Raw Asbestos from the Bell Mine was easily shipped by rail to Keasbey & Mattison’s Ambler, Pennsylvania facility.

In 1918 Keasbey and Mattison Co. took over full ownership of the Bell Mine and mill.

Once the commercial applications for chrysotile asbestos were realized and demand grew, asbestos mining became industrialized in the early 20th Century. Its manpower multiplied by steam-driven machinery and new mining methods increased production. The mine and mill grew to such a size that the miners homes had to be relocated on two separate occasions.  These miners and their family lived with constant environmental exposure.

In 1934 Keasbey and Mattison Company owned the Bell Mine when the company was purchased by British Corporation, Turner & Newall. Under Turner & Newall ownership a wholly owned subsidiary was formed called Bell Asbestos Mines Inc. solidifying the use of the Bell Mine name.

Bell Mines brokered raw asbestos to companies in various parts of the world but primarily to the USA. The Bell mine continued to provide raw asbestos to the Keasbey & Mattison (K&M) plant in Amber, Pennsylvania as well as the Turner & Newall manufacturing facilities in Great Britain.

In 1967, the year Atlas acquired the Limpet Spray Licence for the United States, 54,976 tonnes of fibre from 759,000 tonnes of rock were produced from the Bell Mine.

Sprayed Limpet is considered one of the deadliest asbestos products even used. The raw asbestos was taken to the insulation installation site in large (3ft x 4ft) paper bags which were then cut open and the light “fluffy” asbestos and cement mixture was transferred by hand into the compressed air spray applicator. When the asbestos/cement mixture was combined with water it adhered to the structure surface to form a thick layer of fireproof insulation.

Atlas Asbestos had warehouses and packaging plants in Montreal, Ottawa, Toronto, Regina, Edmonton, Winnipeg and Vancouver where they manufactured and sold a large range of insulation products. Atlas Asbestos in turn granted sub-licenses to various insulating companies in Canada. A listing of sub-licencees as well as a partial list of locations where Sprayed Limpet was installed can be found on the Federal-Mogul Chapter 11 website at:

The open pit at the Bell Mine continued to grow, to just over 14 square km in area. The tailing piles cover an equal area. In the late 70s and early 80s there was an emphasis to improve mine safety and underground mining and wet milling became the norm.

Asbestos mining continued at the Bell Mine under the ownership of the National Asbestos Company (la Société nationale de l'amiante) who purchased the mine and the Atlas Turner line of asbestos products in 1980. In 1986 the mine was purchased by LAB Chrysotile (named after Lake Asbestos of Quebec, LA and Bell.  LA+B=LAB) which consolidated the mine management and continued operations until 2008. The majority of asbestos mined after 1983 was shipped to developing nations with low safety standards.

If you were exposed to raw asbestos at the Bell Mine and are now ill, compensation is available. Please contact Brown Law to discuss your compensation options.