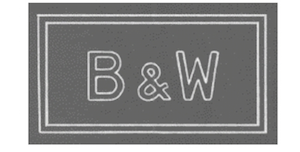 On May 28, 1867 Stephen Wilcox and George Babcock obtained a patent for a water-tube steam boiler which they went on to build and distribute using the corporate name Babcock, Wilcox and Company. They set up shop in Providence, Rhode Island and sold their first boiler to a local wool mill later that year.

In 1869 the company leased office space on Courtland Street in New York City which the company designated as their headquarters in 1871. They had a spectacular breakthrough at the Centennial Exhibition in Philadelphia in 1870 where they received national recognition. The Company was well and truly on its way.

By 1875 Babcock & Wilcox was recognized as an industry leader on the subject of steam power generation and they were awarded a gold medal at a competition to celebrate 100 years of American independence in 1876. The boiler on display at the Exhibition captured the attention of potential customers and the display boiler was purchased on the spot by a New York sugar refining company. Orders for additional boilers were placed including by Thomas Edison who used a B&W boiler at his machine shop in New Jersey. Edison went on to have B&W boilers installed in his electrical power stations.

Babcock & Wilcox first step to expand their company globally was taken when they opened a foundry to build B&W boilers in Glasgow, Scotland in 1881.

This was a product line-up set to provide industry with the means to generate power for their own business as well as to sell to the public. Most of the boilers built by B&W in Canada, in addition to the name being stamped into the unit, also contained a maple leaf as a universal symbol that these were Canadian boilers.

Babcock & Wilcox obtained the contract to build the steam generators for the Pickering Nuclear Generating Station in 1968, Canada largest nuclear power station at that time.

Brown Law Office is located close to the Pickering Generating Station and we represent numerous former power workers who have subsequently developed mesothelioma. With the rise of secondary-exposure claims we are also able to apply for and obtain compensation for family members of power workers who are ill.

There were thousands of Babcock & Wilcox boilers and steam generators installed in Canada. If you believe that working with one of them has caused you or a loved one to have one of the asbestos diseases, please contact us to discuss your compensation options.