Experience. Dedication. Results GET A FREE CONSULTATION
Home
Asbestos
Asbestos in the Home

Asbestos in the Home 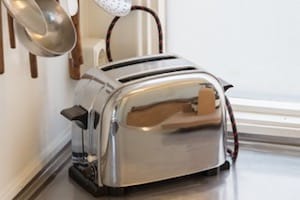 Asbestos was hyped as an amazing, inexpensive, fire retardant and heat resistant mineral that could be used in the manufacturing of countless products, which we generally associate with industrial use. Not so long ago, there were many products used domestically in the home that contained asbestos.

Today, it seems amazing that the public was kept in the dark for so long. It is the suppression of the dangers of asbestos that has opened the manufactures of asbestos products up to claims against them in numbers large enough to bankrupt many companies. After bankruptcy, remaining company assets were used to form asbestos settlement trusts to compensate the victims of users of their asbestos containing products.

The actual list of items containing asbestos that were common in homes before 1982 is staggering. Most of us (of a certain age) will recall Armstrong floor tiles or Johns-Manville ceiling tiles. But what about that ironing board cover or oven mitts? Chances are they contained asbestos as the fibers were woven into textile cloth, which in turn was fabricated into fire retardant items.

Appliances also had asbestos insulation, including dryers, stoves, toasters and hair dryers. If it was meant to be hot, it most likely contained asbestos to increase the safety of the product. Asbestos wool insulation was manufactured by many companies and sold to appliance manufacturers. The insulation around dryer drums, ovens and tv tubes was meant to contain the heat to make the appliance more efficient. The “cloth” type of covering for the appliance cord contained asbestos. The wiring in, and around, your electrical panel in homes that still have older fuse boxes may be asbestos coated.

Given that we are talking about asbestos being in wide use for over 100 years, if you were born before 1982, chances are there was asbestos in your home.

We learned from an engineer that worked at the Canadian Admiral plant at 501 Lakeshore Road, in Port Credit, Ontario, that at one time all radios and televisions manufactured in that plant contained some asbestos insulation around parts that were hot during use. The engineering schematics specifically called for asbestos wool. The same gentleman told us that he did not believe that the line workers were ever told that the insulation being installed in fridges, dryers and ovens contained asbestos. Not only does that mean that the factory workers who worked for Canadian Admiral from 1951 (when the plant opened) until 1981 (when the parent company went bankrupt) it means that thousands of homes that contained Canadian Admiral radios, televisions and other appliances also contained asbestos which could be released into the air when the item was serviced or repaired.

Other sources of asbestos in our homes are varied. Pop-corn ceilings, textured wall coatings, drywall joint compound to name but a few. While we need to remember that these products pose little danger while they are left alone, disturbing them during renovations or remodeling releases the asbestos particles into the air and unless the area is sealed, and masks are worn, there is risk to home occupants.

If a product in your home (that you suspect may contain asbestos) shows signs of deterioration please consult a professional to test, and if necessary remove, the materials. When you meet with an asbestos abatement contractor you should discuss the specific steps that must be taken to prepare the work area to make sure that:

The following activities could put you at risk of releasing asbestos fibres into the air in homes when:

Asbestos containing materials are safe when encapsulated. This is a process by which a sealant is sprayed on the insulation forming a thick coating. A layer of paint is not sufficient and puts the painter at risk.

If you have been diagnosed with an asbestos related disease, contact us to learn more about your compensation options.