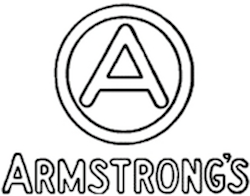 In 1928 the Armstrong Cork Company registered the ™ logo displayed in Canada. They described their product line as “products used for covering insulation similar purposes including linoleum and products made therefrom”.

The story starts much earlier than 1928. Thomas Armstrong started the business in 1860 in a small shop in Pittsburgh, Pennsylvania, where he and business partner, John Glass, carved cork bottle stoppers by hand. Imaginatively Thomas Armstrong branded each cork with a circle A brand starting as early as 1864 making himself a pioneer in the advertising and marketing of products. The Armstrong Cork Company was was the largest cork supplier in the world in 1890. Armstrong incorporated the company in 1891 as a Pennsylvania corporation.

As the use of cork declined with the advent of alternative closure products, Thomas Armstrong, ever on the lookout for an opportunity, had the company introduce insulating corkboard. This led to other uses of cork including flooring. In 1906 Thomas Armstrong decided that the future for the Armstrong Cork Company included floor tiles and linoleum.

Armstrong commenced construction on a facility to manufacture linoleum and floor tiles on a plot of land he purchased in Lancaster, Pennsylvania. Thomas Armstrong did not live to see production commence as he died in 1908. The first linoleum rolled off the line in 1909 under the direction of Charles Armstrong, who took over the company on his father’s death.

By 1932 Armstrong opened a Canadian subsidiary corporation headquartered in the McGill building in Montreal, Quebec. That corporation was called the Armstrong Cork & Insulation Company as by 1932 insulation was a significant part of Armstrong’s business. The Armstrong Cork Company was incorporating asbestos into their floor tiles and insulation as early as 1931. Floor tiles used very short strand low grade asbestos fibres as fill. Cutting and installing floor tiles released the asbestos particles into the atmosphere.

To keep the building products division separate from the insulating division, Armstrong decided a separate corporation was needed. Therefore in 1958 the Armstrong Contracting and Supply Corporation (AC&S) was formed. Armstrong wanted to move into the business of supplying and installing higher temperature insulation products and a host of new insulation products was introduced. These products contained high levels of asbestos.

Armstrong Cork continued to run Armstrong Contracting and Supply for 10 years. Having suffered some financial losses and wanting to get back to their core business of flooring and building products, AC&S was sold to 31 existing and retire employees of the company in 1969.

AC&S subsequently purchased from Turner and Newall the license to sell and install Limpet Spray insulation in the United States. Limpet spray is made almost entirely of raw asbestos, combined with mineral oil and sprayed under high pressure. The overspray from installing Limpet Spray put anyone in the vicinity at great risk of breathing in asbestos particles. Limpet Spray, combined with a lengthy list of Armabestos and Armatemp products, became the basis for many injury claims by users of AC&S products.

AC&S, under an unsustainable cloud of asbestos liability, filed for reorganization under the Chapter 11 bankruptcy rules in September of 2002. The Bankruptcy court approved a plan to establish a compensation trust funded by $400 million in cash plus partial ownership of the company. The Trust opened for claims May 26, 2009.

By forming a compensation trust, AC&S, now Irex Corporation, cannot be named as a defendant in any asbestos liability action. If you or a loved one has been diagnosed with an asbestos related disease caused by exposure to an AC&S products contact us to obtain information about the claims process.