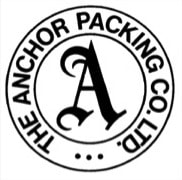 Anchor Packing was established in Montreal in 1909 as an associate company to the American division located in Philadelphia. After a number of years of growth, the company moved into premises at 5600 Philippe Turcot Street, Montreal in 1935, where they remained until the company closed in 1993.

The Anchor Packing company was responsible for bringing a line of molded gasket and packing products to the Canadian market which Garlock was not yet making in Canada.

Anchor became a subsidiary of Garlock Sealing Technologies in 1987. In 1993 Anchor discontinued its operations and the company has been little more than a name being sued by thousands of asbestos claimants.

Garlock Sealing Technologies filed for creditor protection in June of 2010. The Anchor Packing Company was included with this Chapter 11 bankruptcy proceeding. Garlock has been locked in a battle to establish a trust aimed at the resolution of all pending and future asbestos claims which funding was approved in June of 2017. The trust is not yet open for compensation applications.

Contact Brown Law to discuss your other compensation options if you have developed mesothelioma after working with Anchor Packing asbestos gaskets and packing products.