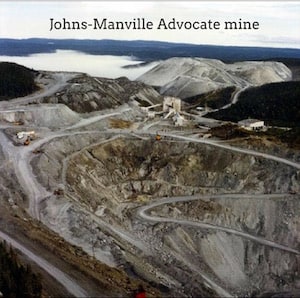 Asbestos was first mined in Newfoundland as far back as the 1890s when it was discovered on the west coast in both the Bay of Islands and Port-au-Port areas.

Norman Peters and George McNaughton, Newfoundland prospectors, discovered a large asbestos deposit in the Baie Verte area in August 1955. Copper and sulfur had previously been mined in the area, encouraging prospecting for mineral deposits.

On learning of the discovery, Canadian Johns-Manville jumped to establish a division to own and operate the mine. The Advocate Mine corporation was established in 1955. Surface land with mining rights was purchased by Advocate (Johns-Manville), and open pit testing and exploration started in December of 1955. 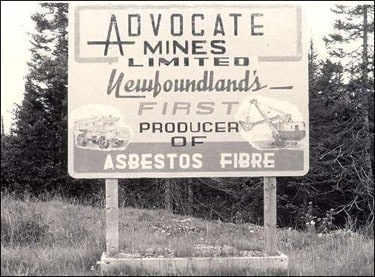 In 1955 Asbestos was a valuable commodity. Mining, even at full capacity 24 hours a day, could not meet demand. The testing done by Advocate between 1955 and 1957 showed the asbestos deposit was substantial. A small test plant was constructed in 1959. A decision was made to expand and mine chrysotile asbestos at this site.

Full scale production was achieved in 1963. The major market for the Baie Verte asbestos was Europe and South America as it was easily loaded for transport in the Baie Verte port, mere miles from the mine. The mine employed 550 direct mine workers at the height of production.

As early as 1964 there were recorded complaints about air quality. Small improvements were initiated to placate the workers, but regular air samples were not taken for years. Improvement in work conditions usually came through union contract negotiation but were not continued by the company once the labour dispute was resolved.

The Baie Verte miner strike in 1977 was the first of its kind in Canada, being a strike not for higher wages but for health and safety issues. In June 1977 the union brought in Dr. Irving J. Selikoff to physically examine mine and mill workers. 97% of the work force was tested with 10% of those examined already having lung abnormalities caused by breathing in asbestos. The report was published in December 1977 during contract negotiations.

The union, being the United Steelworkers, insisted that the company meet Dr. Selikoff’s health and safety recommendations. The strike started on February 12, 1978, when Johns-Manville refused to institute safety protocols such as adequate particulate filters. During the 14-week long strike there were mass demonstrations, particularly by the women and families of the mine workers. Johns-Manville gave in and some basic improvements were made in working conditions. Masks were issued to workers but there was no requirement to wear them. Because the masks clogged up quickly it was common for mill workers to take them off or simply not to wear them at all. Likewise, the air filtration equipment would become clogged and often removed until just before the next inspection when it was cleaned and re-installed. This was customary practice in all Johns-Manville facilities.

It took until 1980 for an employee change house to be constructed, and used, so that the dust covered clothing did not have to go home to be laundered. With the awareness of the risk to workers came the realization that mine workers families were being exposed through second-hand or by-stander exposure.  Family members who were exposed to asbestos through a mine worker are not entitled to workers' compensation benefits if they become ill.

Production was around the clock for almost 30 years until Canadian Johns-Manville, and all its subsidiary corporations, including Advocate Mines, filed for creditor protection in 1981 and then declared itself bankrupt in 1982.

The parent company, Johns-Manville Corporation (USA), declared bankruptcy in 1982, citing asbestos litigation as the major contributing factor. Johns-Manville became, at that time, the largest manufacturer of asbestos products in the world to break under the enormity of the hole the management had dug by suppressing the truth about the danger of asbestos. Management at Johns-Manville commissioned a report from the Saranac Laboratory completed in 1943, but then hid the finding that asbestos was causing the Johns-Manville employees to suffer from extreme levels of asbestosis and early death.

There is significant evidence that Johns-Manville, together with other manufacturers of asbestos products, resisted the use of danger labels on their products as there was a consensus that they would negatively affect sales.

The Province of Newfoundland expropriated the mine and assets and it was reopened in 1982 under the name Baie Verte Mines Inc. In 1991, Terranov took over the mine changing it, at significant cost, from dry to wet processing to increase worker safety. It closed permanently in 1995 when Terranov ceased operating and filed for bankruptcy.

A registry of the of Advocate/Johns-Manville mine workers has been completed with about half of the former workers taking part. This was done purportedly to gain information about workplace exposure and compensation options. This registry may help workers but does nothing for the spouses and children of mine workers who have no recourse to any workplace compensation systems.

It is known that Johns-Manville knew about the danger of asbestos as far back as 1930 when Lewis Brown became president of the Johns-Manville Corporation. By the time of the Saranac Laboratory report in 1943 it was their position to keep the employees unaware of the findings to keep them working.  The secondary goal was to keep employees from filing workers' compensation claims or filing suit against the company. The phrase quoted from the testimony of Charles H. Roemer taken in 1984, is attributed to the Johns-Manville lawyer Vandiver Brown, as “we save a lot of money that way” when asked in the early 50s, if they would let Johns-Manville employees work until they dropped dead.

Johns-Manville was forced through the bankruptcy proceedings to fund a trust for victims of their negligence. Any person exposed at the Advocate mine before December 31, 1982, has the right to compensation from the Manville Trust. This includes those exposed though by-stander or environmental exposure, not just direct mine workers.

If you or a loved one has been diagnosed with mesothelioma, please contact us now as there are time limits to apply. The Statute of Limitations starts to run from the date of diagnosis.