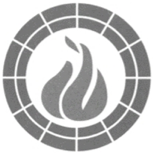 Sales and warehouse divisions were located coast to coast in Halifax, Moncton, Saint John, Quebec City, Montreal, Ottawa, Toronto, Acton, Hamilton, Windsor, Winnipeg, Regina, Edmonton, Calgary and Vancouver.  The sales force travelled extensively to visit paper and steel mills to write orders for their firebricks and insulation products.  The company also had a legion of masons to assist with construction or to repair and rebuild as needed.

It all started in Mexico, Missouri, in 1910. The area contained good clay deposits that was molded and fired into building bricks. By adding asbestos, the bricks were able to withstand higher temperatures and the A. P. Green Refractories division was created. First reported sales of A. P. Green products in Canada was in 1922. A wholly owned Canadian subsidiary, A. P. Green Refractories (Canada) Ltd. was organized in 1931.

Fire bricks were created for use in boilers, furnaces, chimneys and smoke stacks. They were widely used in power plants and paper mills. Specialized shapes to serve specific industry needs were custom made in A. P. Green cast shops.

When the A. P. Green Fire Brick Company wanted to expand their business, they purchased the clay brick operation in Claybank, Saskatchewan from Dominion Fire Brick & Clay Products in 1956. A. P. Green converted the massive brick kilns to gas to increase production. In 1971 they transferred the Claybank works to the ownership of their refractory division. The A. P. Green Claybank Brick Plant closed in 1989 and in 2002 was made a national heritage site open to the public for tours. Workers at the A. P. Green cast shops or the Claybank brick works were placed at significant risk by the company who failed to warn that working with a raw asbestos was potentially fatal.

A. P. Green expanded their product line into other refractory material, including insulating cement, insulation coating, insulation adhesive and castable block mix. All contained 3 – 15% asbestos content. They purchased Insulating cement manufactured by Eagle-Picher Industries from 1948 – 1971. The balance of the products A. P. Green assembled themselves in their seven US and three Canadian facilities. 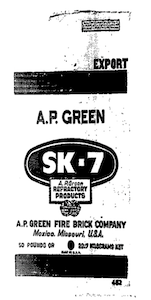 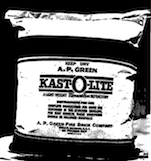 The majority of A. P. Green’s asbestos use was phased out by 1972. Unfortunately, millions of firebricks were already in use. As it was felt that a lower level of asbestos was safe, the company continued to make A. P. Green Chrome Plastic which was a moist, malleable clay material that contained 1% asbestos. This material could be molded by hand onto high pressure pipes as an insulating cement material. Thousands of miles of pipes in Canada were insulated with A. P. Green Chrome Plastic refractory cement before 1980.

A. P. Green continues to operate despite seeking bankruptcy protection to rid itself of the asbestos liability problem. Currently they have a distribution centre in Smithville, Ontario.  They were able to shed their asbestos liability by funding trust organizations to pay compensation to eligible claimants.

Two Asbestos compensation trusts are in operation to review and pay disease claims. You can apply to one, or both, depending on your dates of exposure.

A P. Green also has a silicosis compensation program if you have been diagnosed with any form of silicosis from contact with A. P. Green products.

If you have mesothelioma or silicosis caused by exposure to A. P. Green materials, please contact us if you wish to apply for compensation for your illness. We offer an initial no cost, no obligation, consultation to answer your questions.