Types of Negligence or Abuse

Negligence can result in deaths, broken bones caused by avoidable falls, malnutrition, dehydration, pressure ulcers, abuse at the hands of other residents, being sexually assaulted by other residents or staff, injuries due to improper transfers, being overmedicated, or residents wandering away from the home and becoming injured. 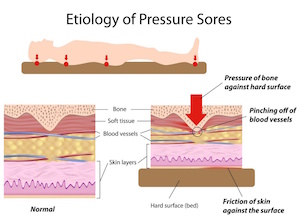 Pressure ulcers occur most often when a resident has been left unattended for too long in his or her bed, a wheelchair, a bathroom or other seated or lying position. Bedsores are more common on the backside, lower back, ankles, heels or backs of the knee. Not as common, they may be present on the elbows, upper back, back of the head or the ears.

The sores are a result of a minimum of two hours of sustained pressure, when the skin is pressed between a bone and the bed, chair or other surface. The sores will start out as redness on the skin, and if left undetected and untreated could permeate through the skin layers to the underlying muscles and bone, often resulting in infection.

According to statistics Canada, one-third of Canada’s seniors are at nutritional risk. The malnutrition may result from eating too little food (not enough calories) or foods not having enough essential nutrients, minerals and vitamins.

In long-terms care homes, residents are dependent on the home to provide their meals as they are not able to get food when they want. Meals are often given at specific times and may be taken away from residents, or not given, if the allotted time for meal is finished, or the resident was sleeping when the meal was being served. Sometimes it may be that the resident is not afforded enough time to consume their meals, without any regard to their needs. They depend on staff to assist with eating and may not enjoy the cold food by the time the staff gets to them, or they may not want to eat the hot food when assistance is available to them. Thus, they may not get enough nutrients as they have essentially missed a meal.

Other instances of malnutrition may result from health conditions the resident has that may cause him or her to have problems that interfere with his or her ability to digest the required nutrients. As an extreme example, the resident may be malnourished because he or she does not like the food and prefers to forgo the meal than eat it. When the facility does not notice that the resident is not getting sufficient nutrition and take steps to address the problem the facility may be negligent.

When a person does not have enough fluids in their body it may result in light-headedness, dryness in the eyes, nasal membranes or skin. There will likely be a decrease in urinating, dark urine or decrease blood pressure. If the condition is not caught and treated it could become fatal and result in death. Adequate fluid may be unavailable to the resident because there is no water within their reach or if they need assistance to drink insufficient staff attention to ensuring that they are consuming fluids.

In extreme cases insufficient fluid is provided to avoid the need to transfer residents to the toilet and avoid incontinency requiring staff to tend to the resident.

Abuse can be physical, emotional, sexual or financial. Physical abuse may occur when another resident or staff uses force against the resident resulting in physical pain or injury. This may include hitting, inappropriate use of drugs, restraints or confinement.

Emotional abuse may occur when the resident’s treatment causes emotional pain. This may involve intimidation, by staff or other residents, through yelling, humiliation or ridicule, diminishing the resident’s sense of dignity and self-worth.

Sexual Abuse is any behavior by staff or other resident, directed to the resident without consent.

Financial Abuse includes the unauthorized use of a resident’s money or property, including stealing cash, having the resident will their estate to staff or forging signatures or identify theft.

Public Health Agency of Canada found that patients taking psychotropic medications, such as Paxil and Zoloft (depression medication), have about a two-fold increased risk of falls and fractures, compared with individuals not taking these drugs. A report by the Toronto Star found these drugs are prescribed at an alarming rate to seniors. Ontario Ministry of Heath found over 40% of Ontario seniors living in long-term care homes, between age 65 and 69 were prescribed antipsychotic drugs.

The reasoning behind the prescribing of medication needs to be examined if your loved one is suddenly taking new medications or appears to be over medicated. If you believe that prescription medication is leading to the decline in the health of your loved one and are not getting satisfactory responses to your enquiries about the situation please make an appointment to discuss the situation with Michelle Brown.